Being a big geek, I usually like graphs, but the first time I saw this, it kinda scared me. 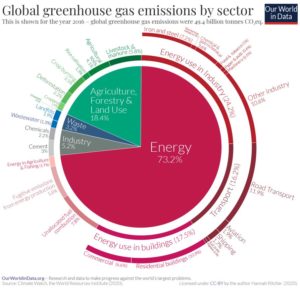 Now, I find it less scary and more galvanising, but it’s still the first thing I think of whenever the conversation turns to climate change.

The graph shows the speed at which we need to reduce carbon emissions to net zero, in order to keep peak global warming under 2°C. It’s from the summary of the IPCC’s 2018 Special Report on the impacts of global warming of 1.5°C. There’s also a really short, non-technical press release here, and it’s well worth 5 minutes of your time to read it.

For now, here’s the most important quote:

“Every extra bit of warming matters, especially since warming of 1.5°C or higher increases the risk associated with long-lasting or irreversible changes, such as the loss of some ecosystems.”

The loss of whole ecosystems is a pretty big deal. This can be scary stuff, and it feels like this problem is so big it’s way out of our control, but the good news is the construction industry has a huge opportunity to be part of the solution – we can and should feel that our small actions and design decisions matter.

We think of things like flying as being the big sources of carbon emissions, but aviation is actually responsible for less than 2% of the total. This is dwarfed by emissions from buildings in use (17.5%), and that’s even before we begin to think about embodied carbon in construction materials like concrete/cement and steel, or the impact we can have on transport as masterplanners and urban designers.

Climate change is not a binary thing that either happens or doesn’t – it’s like a slider; every bit of action we take means the slider goes ever so slightly less far in the wrong direction.

And that’s good; that’s worth doing.

If our industry can achieve a quick transition to net zero carbon in building use and construction, and net zero carbon in transport, thousands of generations of future humans will be positively affected due to the reduction in the damage caused by global warming;

Creatures and whole ecosystems will be saved from extinction for future generations to enjoy. Greater scientific and medical advances will be possible because more of the clues in nature that unlock them will be retained for humans to study.

The changes our industry implements now will affect the livelihoods of millions of people who depend on at-risk ecosystems – from scuba diving instructors on Australia’s great barrier reef to nomadic cattle herders in North Africa. Our actions also impact the future geopolitical stability of the world; fewer famines, more reliable water supplies in some places, better energy security, a smaller increase in the number and intensity of ‘natural’ disasters like hurricanes, droughts and floods.

Collectively, our industry has a huge opportunity to make a dramatic positive difference to how the future plays out. And many of the ways we can reduce emissions through design will make for better buildings and environments for people right now.

James is an Architectural Technologist, Environmental Psychologist and member of the Green Party.